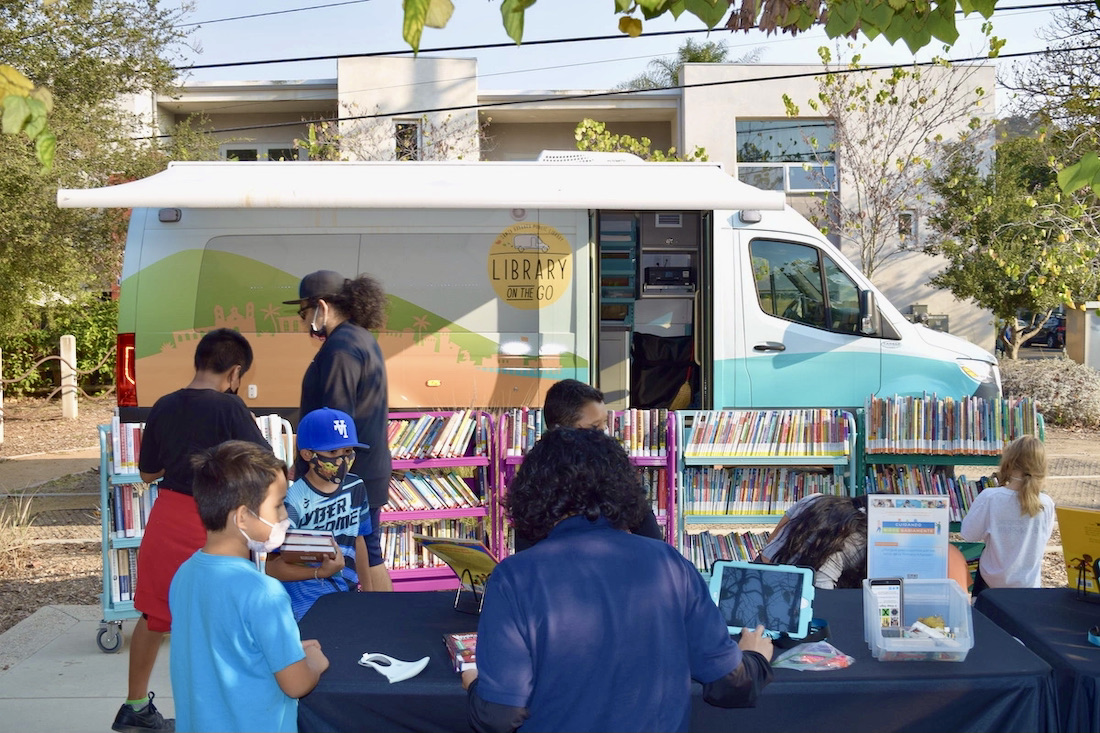 The Santa Barbara Public Library is reintroducing its bookmobile, now called Library on the Go, for the avid readers who have not been able to visit the library in person, largely due to the pandemic.

“With public health concerns over large gatherings likely to continue for some time, this model will also allow for expanded reach outside the library’s building,” said spokesperson Erick Mendez.

For the children of Santa Barbara, the arrival of the van is like a holiday. It’s loaded with custom book carts that can be pulled out and set up outside, with kids perusing rows of children’s books, young adult titles, and graphic novels.

Librarians patiently walk the children through the process of checking out their books, asking if they have their own library card or kindly reminding them to return the books they checked out previously. As soon as the process is complete, the kids plop down on the nearest seat and begin to read as they wait for their peers to finish browsing.

Though the van is a serious hit among younger groups, it also has regular stops at several senior living centers and the neighborhood navigation center, which provides resources to homeless citizens.

Sign up for The News Letter, where Tyler Hayden will catch you up on the news of the week and tip you off to upcoming government meetings on the most pressing issues of the day.

Librarians make sure to curate the book selection depending on where the van is headed. It recently made an appearance at the Asian American Neighborhood Festival, so the librarians included material written by and about Asian Americans.

Molly Wetta, a senior librarian, said the purpose of the new van is to provide resources to the communities that need them most and to create a safe space for exploration. “We want this to be a place where people can ask questions,” Wetta said.

The van, which offers a Wi-Fi connection, provides many of the same services the library did before the pandemic forced it to reduce its offerings, such as early learning classes and kits, nutrition courses, and readings. The van also checks out Chromebooks and hot spots, microscopes, and telescopes.

Taylor Benson, one of the regular librarians who captain the van, said working allows him to build relationships with the people he meets, learning more about them each time. “Coming to the library is a conscious decision, but the van is easy to stumble upon,” Benson said.

The Women’s Fund of Santa Barbara provided $100,000 to put the van into action, with another $150,000 coming from private donations.