Young women make a difference in the Tiny House project 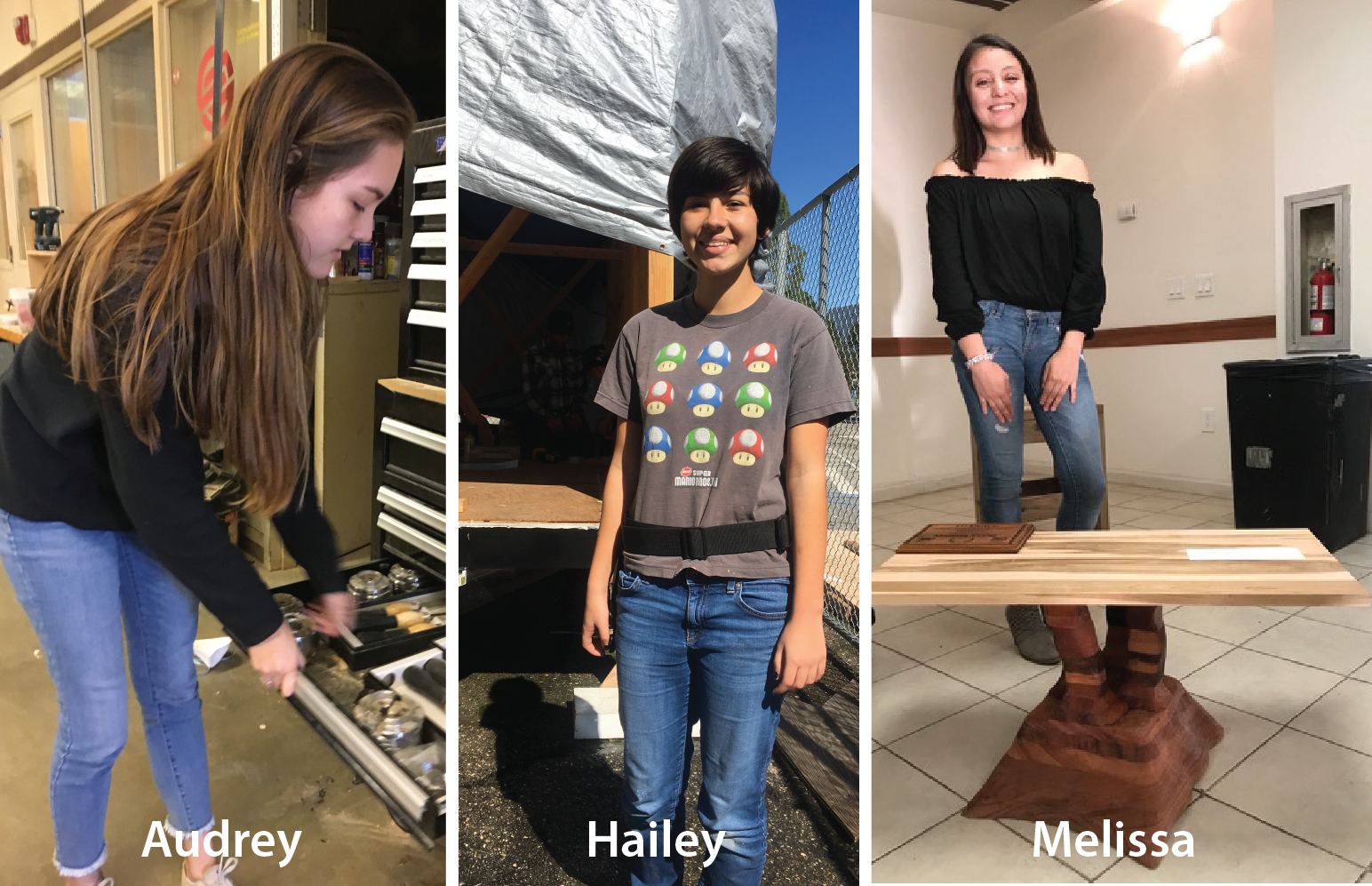 First, a little background—in May 2016, the Women’s Fund of Santa Barbara gave TRADART Foundation a $50,000 grant, earmarked for materials to build three Tiny Houses on the campuses of Santa Barbara’s three high schools—Santa Barbara, San Marcos and Dos Pueblos. To ensure the sustainability of the program, upon the completion of the Tiny Houses, they are to be sold and the proceeds used to fund the construction of three more houses.

Once construction on the houses began, it was clear to the Advanced Woodworking and Construction Technology project instructors that completion of the homes was a two-year project. To help finance the expenses, another source for funding has stepped forward, and the Santa Barbara Unified School District will contribute $25,000 this fall as reported in the Santa Barbara Independent on June 29. Completion of the three houses is scheduled for the summer of 2018.

To better understand the impact of the Women’s Fund grant on the construction of the homes, during the 2016-17 school year, Leslie Meadowcroft-Schipper, founder of TRADART Foundation, interviewed Hailey Wednesday Babcock, Audrey Rowell and Melissa Perez. Each is enrolled in the Construction Technology coursework in their high school.

Hailey Wednesday Babcock is a confident, self-assured, sophomore at San Marcos High School. She is an Advanced Placement student and the only female in her Construction Technology woodshop class. She spends five days a week here, along with any after-school hours she can spare, so she can work on her own projects and the school’s Tiny House.  “I learned tool safety with Mr. Dave Abel at La Cumbre Junior High School.  Mr. Abel gave me a lot of trust and taught me to use the band saw, the chop saw and the table saw. Now I can work on the Tiny House with the seniors, and they respect and listen to me. They even ask me for help because I have the know-how.”  “I love being immersed in solving building problems with my team…I don’t get that opportunity in my other classes.”  She continued, “We are all learning so many new things for the first time every day. What we are learning here will be useful later on in life.” It is evident by her attitude and eagerness that she is having a good time gaining more practical skills and know-how.

Audrey Rowell is a senior at Dos Pueblos High School. She is an Advanced Placement Art student, an International Baccalaureate Environmental Science student, and is enrolled in the Tiny House construction class, because she feels it expands her range of talents and abilities as an artist. A year ago on Electives night, she walked into Mr. Chris Mollkoy’s classroom and was introduced to fine woodworking. She now uses the lathe and other tools to make beautiful bowls and decorative objects.

Audrey is not working on the Tiny House during the framing stages, but her skills will be called upon later, when the cabinets and finish work begin. She said that woodworking has helped to teach her patience with herself. “It takes time to get the idea out of my head and learn to use the various tools I’ll need to produce the object I’m trying to create."

Melissa Perez came to Santa Barbara High School woodshop from Mr. Palmer’s woodshop class at Santa Barbara Junior High School. Although, only a sophomore, she was made the project manager for the Tiny House project. To complete the construction of the Tiny House, Melissa encourages her team to keep working hard. “I tell them to stay focused and finish the job. Just believe there will be an answer to the problem, if we all stay focused.” And she leads by example. “If they see me doing something difficult, they try it, too.

Melissa also likes to be known as an environmentalist. “I don’t want to waste anything.”  She has a passion for salvaged wood and bringing out the beauty in a piece of seasoned mahogany or walnut. “I love salvaging a piece of rough lumber and turning it into a decorative object.” Her instructor at Santa Barbara High, Caleb Chadwick, said Melissa will go as far as she wants to go in the field of construction, because she can think conceptually, has a sense for good design and patience in the execution process of a project. Mr. Chadwick made her the project manager of the school’s Tiny House project site, when she proved to him the students had framed the walls correctly after he had told them they were wrong.

Melissa was offered an internship at DD Ford Construction during her 2017 spring break. And just this last May, for the second year in a row, she won first place in the furniture category at TRADART's Annual Woodworking Show & Competition (the photo collage show Melissa with her prize-winning coffee table).

For years TRADART Foundation has been operating the Tools for Schools program, and now, because of first-rate teachers and the Women’s Fund grant, students are learning construction scaled to real-world standards—building a Tiny House. An added benefit for students is they can choose to enroll for “dual credit classes,” which count for credits toward an Associate Degree in construction technology from Santa Barbara City College.

Teachers Chris Mollkoy at Dos Pueblos High School, Justin Howe at San Marcos High School and Caleb Chadwick at Santa Barbara High School teach over 60 students who are absorbed in the world of construction. They have created a gender-supportive environment and are encouraged to see a greater number of young women enrolling in their wood shop program than in previous years. This wouldn’t have happened without their courage and vision to make a change to the wood shop class curriculum by exploring the popular national Tiny House movement. Well done!